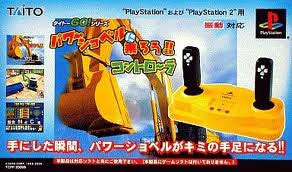 Genki has nothing but the utmost respect for digger operators (and crane whilst we're on the subject) having taken the time to get to grips with the gaming equivalent and decided the real thing must be much harder. At the height of retro chic comes this fine controller allowing gamers to get a real feel for being a digger operator. Prove yourself the king of Komatsu or the top-cat of Tonka in being able to operate this deluxe and solid Power Shovel Controller that commands a hefty price in its homeland. Not quite one for the CV, but players will be feeling confident of commanding that run away digger in the future... 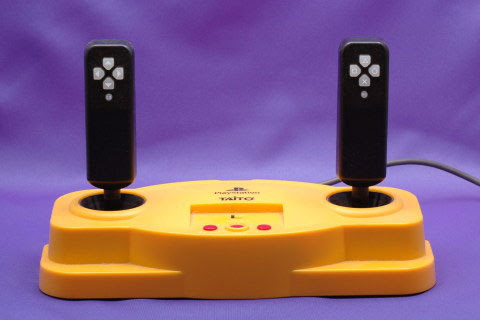 Posted by GenkiVideoGames.com at 10:01 No comments: 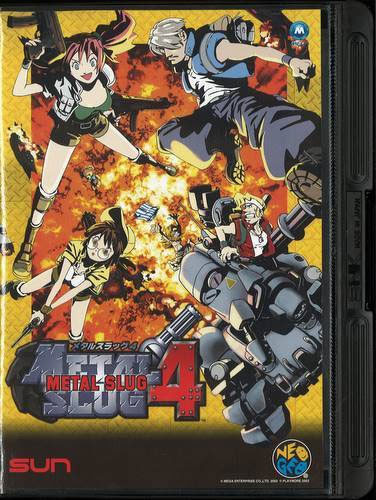 Genki was lucky enough to receive a cool grand for turning of age at 18 years old. So what did manhood mean this little nest egg was used for? A reliable runner? A Post Office account and a wee bit left over for a pint or two? No such sense had been impressed in the cerebral cortex. The purchase decision was to snap up a Neo Geo and two carts with enough change left for the BFH*. (* Bus Fare Home...)
Still plenty of Neo Geo titles do hold their value very well (not unfortunately Fatal Fury Special and Samurai Spirits however...) But there are some fine, upstanding members of the community who, having unlike Genki, used their grey matter (perhaps in line with their nous for finance) and enjoy their gaming hobby with a few investments in AES titles. One such title currently held by the Genki that gives us sleepless nights and panicked phonecalls to the insurance brokers is Metal Slug 4. Saving hostages who show their gratitude, looking at the sheer shock on faces as they get snuck up on by stealth, charging all guns blazing with a tidy power up.... Enough to make you well up with pride. Plenty of vehicles to command and giant boss ships to let rip into. Wearing its 2D tats with pride, Metal Slug: we salute you. Just don't come near anyone's cup of green tea or Genki might go copter.....
Posted by GenkiVideoGames.com at 14:02 No comments: Perhaps the DS isn't the most notorious format for shooters, but it has a couple of fine examples that are worthy of a post. Perhaps the lesser know of the two we have in mind (one for each of our subscribers..) is Danshaku which lures in the modern gamer with smooth 3D graphics yet its mechanics are strictly retro. Its an old school shooter but done in the third dimension producing quite stunning results with crisp, colourful pixels on the small screen. Utilises the dual screen and touch function well with a useful radar, but its wireless two player with only one cart that really whisks up a hail of bullets frenzy. Quite rare of late. The other gem we have in mind for a bit of a blog buff up is Bangaio Spirits. A National Treasure which gets a worthy update to hopefully woo more with its charms.  Full of tongue in cheek humour as you'd expect from this developer and some very funny English translations. Huge title with plenty of levels and even a level editor for the DS version. Cunning counter attack method involves waiting until your ship is in imminent danger before launching the counter, and the results are the more spectacular depending on the level of danger. And based on the experience of past competitions, Treasure have made data transferable via sound so that another DS can upload it or even it can even be sent onto the net for the real high rollers.
So there you have it: the DS is more hardcore than it may look being played by the young person on the train next to you...
Posted by GenkiVideoGames.com at 14:05 No comments:

Getting beach volleyball on the mind is dangerous thing to do. Besides the tributes to Rock that incessantly play during the breaks in play, Genki misses the innocence of a Dig on the beach being a precursor to building a moat for a sandcastle and when a Monster Block was a friend with a rather enlarged head. Whilst the jury may still be out as to whether its a serious Olympic sport or a sub-tropical sideline conga-ing along the IOC bandwagon, it role is very much cemented in video gaming heritage.


The Dead or Alive developer Tecmo has always been one to court controversy and these very sweet off shoot from the Xtreme Beach Volleyball game look a perfect piece if visual candy with Hitomi chan clutching a volleyball in bear pants. Highly desirable piece of skilled craftsmanship and an essential icon for the figure collecting, games fan. And those after a tribute to the bubbly sport of beach volleyball. Posted by GenkiVideoGames.com at 11:54 No comments:

Thanks to the Olympic legacy many will be introduced to the delight of beach volleyball. Appropriately 'Benny Hill' music accompanies the raking of the sand back into a playable court by the ball attendants. It fits them charging around with rakes and it also fits to highlight the more lecherous element of the sport. Still those caught starring at the odd derrière can blame the fact that is where the signal on what serve is given to your team mate.
Beach volleyball was given a highly accessible, arcade version which still takes time to master in Beach Spikers on the GameCube. Plenty of beautiful, bronzed flesh on show in this fine  translation of the glamorous, Olympic sport alas without the Benny Hill theme tune. Character design also possible for the dedicated fan. Happy Olympic Gaming. 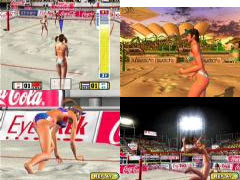 Posted by GenkiVideoGames.com at 13:29 No comments: