Hats off to Microsoft. I mean for the shoot 'em up baton to be passed from Saturn to Dreamcast was an expected tradition. (It could easily be argued due to the strength of the Thuderforce series that the progression was from the Mega Drive as well...) But for Microsoft to highjack the relay (especially when the runners were very much low on steam) was unexpected to say the least. From corporate echelons has come a clear desire to be the king of the genre most cherished by hardcore gamers alongside one on one fight titles. And there are plenty of shoot 'em ups for the shmup veteran to get their callouses worked up on the 360....
Dream double pack with two Dodonpachi Daifukkatsu games: ver 1.5 and the Black Label versions. The chain meter clanks up as players shoot down adversaries to help boost score for the cool fingered gamers out there. The Akiba influence is definitely there too as players are assaulted from enemies from high school girl assailants to mecha maids. But underpinning the pink bullet eye candy are solid shooter mechanics and some sturdy level design. The on the ground vehicles keep players eyes twitching between multi levels as tanks grind along and trains whiz by. The water transparencies are exquisite too as ships fly out from under the surface having trailed the players vessel. But the 360s raw power is also harnessed to make the bosses perform the odd 3D rotational twist workout.
Posted by GenkiVideoGames.com at 14:00 No comments:

Genki had trouble resisting what must be one of the most deluxe of limited editions ever produced, including the Dreamcast Sega releases. Granted the investigative detective game is a lavish production with incredibly high values in the lusciously animated sprites and fine voice acting. But the pack really draws the attention for the incredible time piece included in it. Such a watch is worth the admission fee alone, let alone to Evangelion fans... Delightful. Shame Sega never tried to up the ante by including a Rolex alongside Shenmue III.....
Posted by GenkiVideoGames.com at 12:18 No comments:

A great idea to get the children studying Japanese or a more cunning plan from Sony to get kids into the Playstation...? The former seems more likely as the simple controller helps little ones practise their hiragana and maths without even realising. Anpanman and co. make for delightful hosts to help pick up the nuances of the Japanese language and are friendly enough to invite older students too.
Posted by GenkiVideoGames.com at 10:48 No comments:

Genki used to have a bit of a swagger in his step and a bit of a youthful waggle in his joystick. But fear not: this is not confession time. More reference to the blow to one's confidence from sampling the Super Battle DVD footage. Perfect combo's and usually unobtainable specials are de rigeur making Genki look like a positive button masher. (And a block and sweeper too...) The technique behind the players must have taken a few thousand Yen to hone in arcades , possibly recouped in gaming contents; although plenty of the titles are underground like Melty Blood not guaranteeing the best of returns.
Anyway don't say you haven't been warned...
Posted by GenkiVideoGames.com at 14:30 No comments:

The strength of the Japanese gaming market means plenty of diversification into other areas: plush figures sit plumply along more streamlined PVC models, DVD's show how to attain that perfect run (though Genki finds them bad for moral seeing how the pro's do it...) and good old fashioned audio CD's.

Vast variety exists in the market from the air guitar strumming that is a requisite in Sega Rock to the hands (joypads?) in the air, big fish, little fish (AES box, GBA box?) tunes of B Univ and their Technicolour Virtua Fighter tracks. Some appeal to the collector in us such as the Block/Gyro Set Soundtrack with its coffee table chic. There are "Drama" CD's which just have the voice actors and actresses in all their pomp but again a tasty morsel for the series completest. Some simply appeal due to their covers...

Tune it and listen to a track out of the game bubble and its surprising how well the music stands on its own. Just witness the dedicated nights for fans of chip tunes. Keep it Nintendisco!

Posted by GenkiVideoGames.com at 14:38 No comments:

Not a bit of Genki propoganda (for a nice change...), but a look into a Saturn devoted magazine with adverts for the fine titles released for it, plenty of shots and features on the games for it and above all an original demo disk. What a roster of playable titles: Strikers 1945, Sonic Wings Special, Puzzle Ghouls and Ghosts, Keio Yugekitai, Metal Black... Some real headliners in the form of Shinrei Jusatsushi Taromaru, Prikura Daisakusen and Tryrush Deppy which are quite unobtainable otherwise, even to Genki's man in Japan.

along with video samples from Nights, Last Bronx, SF Zero 2 and the lesser spotted Sonic The Fighters.
Superb stuff.
Posted by GenkiVideoGames.com at 13:55 No comments: 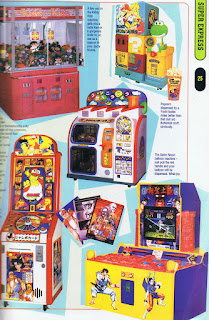 Genki's love of all things import (and burgeoning Super Famicom section) no doubt stems from a fantastic publication that was Super Play. A browse through the magazines brings back floods of nostalgia and they certainly weren't in Nintendo's pocket covering a fine array of Japanese, import-only titles. Nor did they indulge in the 16Bit wars demonstrating a love of gaming for what it is and focusing on the core value of gameplay. Such honesty in reviewing was like a breath of fresh air and much needed in the days when publishers and journalists seemed a little too close (and not just at the publicity launch party.) In the picture we can see an arrange of the coin-ops covered in the article "Live from Hell City" (though it sure looks like heaven too us...) Popcorn dispensed by Yoshi, cuddly Chun Li plushes on the UFO Catcher, a Sailor Moon balloon dispenser, a tasty set of Fatal Fury cards and a tidy mole bashing game themed to Street Fighter including old Balrog popping up (though surely true street fighters would refuse the boxing glove, like those who enjoy the Sonic Blastman punch balls in kebab shops. But don't get me started on those...)
Posted by GenkiVideoGames.com at 15:56 No comments:

Ohisashiburi desu. :)
Its hard to not feel the sting of a tear of nostalgia taking a look at the Neo Geo Museum site.
I suppose blowing a financial windfall on an eighteenth birthday on an AES system and a couple of carts wasn't perhaps what was intended of Genki. Yet it turns out it would have been the most watertight of pension plans (had it not been traded for a Saturn... ) Proving we have learnt little, the quest to get hold of a 100 Mega Shock drinks tumbler goes on...
Posted by GenkiVideoGames.com at 11:56 No comments: