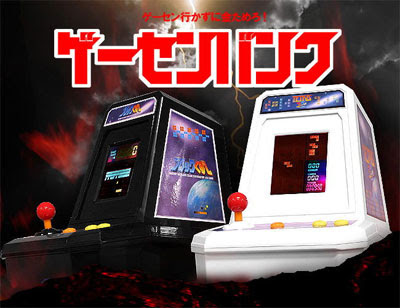 Reminiscent of the Frogger machine (except the bold, yellow plastic is white or black and this fitting tribute takes coins) comes the Game Bank. A good way to save with a variety of coins accepted, budding savers are rewarded with a healthy slice of Breakout or Tetris. The gameplay might be proudly old school, but there is something about firing it up on a miniaturised coin op complete with cabinet graphics. So now a new generation can be introduced to the delights of under the cover gaming after lights off. Just don't be surprised if there are a few bleary eyes the next day...
Posted by GenkiVideoGames.com at 09:46 No comments: 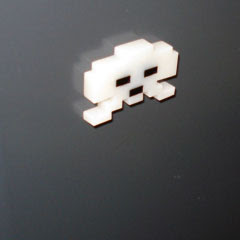 "Women of a certain age..." Sang Tina Turner. Well "gamers of a certain age" can't fail but to recall the image of Space Invader's UFO's, Squids, Crabs, Octopuses and Cannons. In fact few will still have their images burned like white phosphorous into their mind's eye. 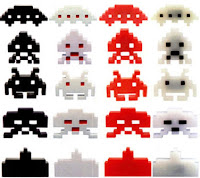 At last help is at hand from these small Space Invader Magnets which serve to state a claim to the family fridge and also stand as a cry to help from the cycle of abuse that is shump gaming. They also include a small sticker to celebrate their retro chic. Just don't get busted rearranging them in slow moving lines making the authentic beeps and removing the occasional magnet in the wee hours of the night.
Posted by GenkiVideoGames.com at 14:13 No comments: 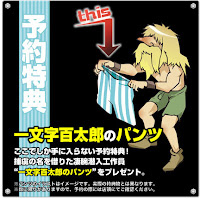 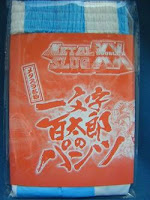 No we don't think Metal Slug XX is pants. We think its rather good to be honest. (Please forgive the games magazine humour...) What we are referring to are these fine stripey numbers which were available as certainly one of the more unusual pre-order gifts in Japan...
Granted the pants, or boxer shorts, do make an appearance in the game. But they aren't perhaps what the fine 2D run and gun series is most famous for... Although a good sense of humour has always been a trait in Metal Slug at a time when gaming started to take its 3D self a bit too seriously. 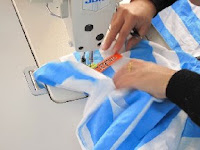 Though I can't imagine the SNK Playmore boss was too impressed at having to stitch up these badges on to the fine lingerie. Still I imagine the SNK liquidators were clear 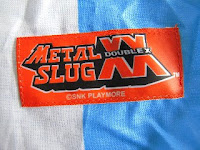 from the start that the days of the Rolls Royce console and all its mega memory hungry carts were over...
Anyway here's to unusual pre-order gifts. Which self resepecting gamer wouldn't be pleased to receive a pair for Christmas...? And there can't be too many undies for men that would bring such cheer....
Posted by GenkiVideoGames.com at 13:47 No comments: 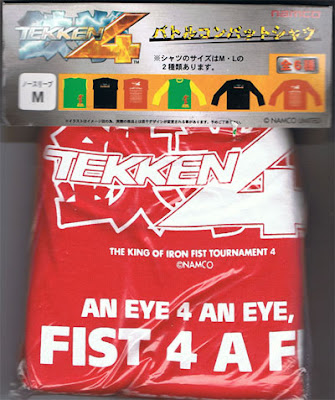 Trust me: you see someone down the Namco Station wearing one of these then don't mess. They have competed in the The King of Iron Fist Tournament 4 competition. Besides its sleeveless. But as for gaming kudos there can't be much better. They only come in medium size though so more for those who practise their martial arts as much as they preach them on Tekken.
Posted by GenkiVideoGames.com at 13:45 No comments: 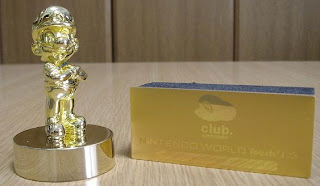 Yoiks! What a treat. These wee tributes to the moustached gaffer of plumbing are too hot to handle, too cold to hold. Deserving of placing into a time capsule for future generations to be able to understand the magic of Mario and his innocence as he gulps down vibrant coloured mushrooms and explores mysterious pipes. But I think we'll have to keep them on the site for now. Unlikely to hit the top of the must have presents list this year being exclusively available to Club Nintendo of Japan Members until now... But there will be few gamers in their thirties who wouldn't shed a tear to unwrap one of these on the big day (then probably clear the Wedgwood out the cabinet and rearrange the spotlight on this figure....) Golden Mario: you deserve it!
Posted by GenkiVideoGames.com at 15:15 No comments: 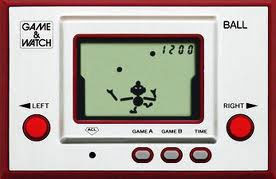 Some very tasty collectables are available to Club Nintendo of Japan members who save their points rather than splash them on soundtracks or DS games. Following on from the DS Game and Watch Collection titles, dedicated points collectors can actually own a reproduction of one of the early Game & Watch handhelds. Guaranteed to cost less points than the amount of collector kudos points it will generate, it was commissioned to celebrate the thirtieth anniversary of the Game & Watch release of Ball. 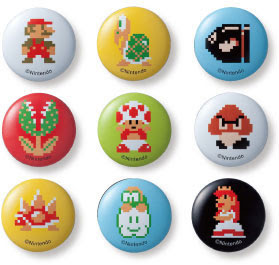 Dedicated Nintendo fans, can nail their colours to the mast or most likely their caps, with these lavish pin badges. The Club Nintendo Original Badge Collection is de rigeur for getting a go on the Nintendo pods at the Tokyo Game Show, but possibly its best to avoid wearing to many in a thunderstorm. Even the boxes have been designed for the collector, piecing together to make a pixellated picture of Mario to celebrate his 25th anniversary. Besides the retro kudos, the boxes can be arranged to make different scenes from the early years of the eternally youthful Mario series.
Club Nintendo of Japan: "ii na!"
We'll keep them coming: Look out for gaming handkerchiefs and golden Mario statues....
Posted by GenkiVideoGames.com at 09:14 No comments:

So what else can hard earned points be spent on with the Big N in Japan? Well how about these DS games? No overly expensive intros or CG developed plots, just lashings of solid gameplay to remind us why handheld gaming can be tube stop missing fun....
Whilst slightly envying those who can't recall scratched screens and playground brawls over whose go it was on Donkey Kong, Genki also has a slightly wry smile when thinking back to the misty days when toy shops had counters containing the exotic Game & Watch Collection. In fact, Gen

ki would go so far as to say we wouldn't trade such memories for a full head of hair. Well not on a good day anyway... Yet in Nintendo's all encompassing love for its devotees, gamers of all ages can press there slightly runny noses and Space Invader crisp fingers over the glass counter once again with these delightful compilations...
Three titles are included in the initial installment: the pest ridding Green House, the overrun mechanic in Oil Panic and the evergreen Donkey Kong that still whiles away those car journeys, though ideally not when driving. In part two Octopus and Parachute help to while away any waiting lounge. Happy days.

But that's not all: Tingles Balloon Fight DS is a tribute to the classic title and very tasty Game & Watch making good use of the DS's merits and with clever single and multi player modes to extend the games longevity.
Finally Zekkyo Senshi Sakebrain demonstrates a strangely expansive gaming world for a give away title (well for those with the required points) with atmospheric rain lashing down on the Goemon style towns through which our samurai be suited players stroll. Plenty of opportun

ities to test martial arts ability soon prevail with the mic being used to issue commands to your player such as kick or punch. Players can also transform into a lycra suited sentai with the feel of plenty of cheese and ham as in Ouendan as the over the top transformations take place. Multiplayer only for two or three players and players must work in true Wa harmony to beat the bad boss. Perfectly designed for such a giveaway title.
So there you have it: ghost Club Nintendo of Japan memberships, we salute you.. Just don't expect the envelope it was sent out in to not have the delivery address blacked out for fear of the Big N ninjas....
Posted by GenkiVideoGames.com at 10:23 1 comment: 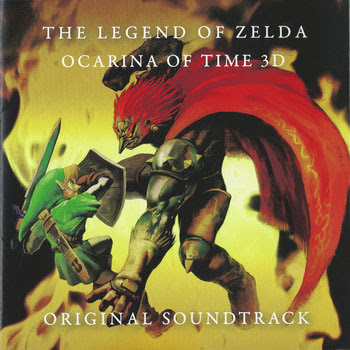 Japan is a land of many contrasts - but we are not to start on about the yellowing reddish leaves under the shadow of Fuji san as the amusement park jet coaster zooms past. Oh no. Contrasting fortunes of gamers have varied vastly, but here in the West we definitely seem to be catching up. Yet still preferential treatment in Japan exists, matching the high levels of service found elsewhere in society there and building up intense brand loyalty.
The point? Club Nintendo and there fine, spanking gifts for those who collect enough points. Luckily here at Genki we have been able to obtain a few of the finer examples. Today we would like to introduce the soundtracks...

Before running a mile, gaming music can be incredibly emotive and a vast number of triple A titles boast soundtracks that would stand alone on a headphone pod in the busiest of Shibuya HMV stores. Admittedly that Super Mario song has alot to answer for, but behold the soothing orchestral strokes of Zelda before the action and tension is cranked up in the mere change in tempo. And the Super Mario Galaxy 2 Original Soundtrack banishes memories of red dungarees and stick of 'tashes with wonder and freshness of the game with emotive and rising tunes. Beautiful stuff.

Finally the Mario & Luigi RPG Soundtrack captures the charm of this brotherly combi and there innocent love of fun. So hopefully now Western gamers can feel the love their Eastern cousins enjoy. And hopefully that'll help us all unwind from those over intense FPS before we forget the fun in gaming.
Posted by GenkiVideoGames.com at 11:23 No comments: