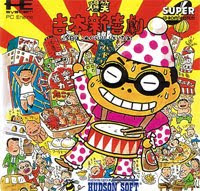 A true hidden gem for the PC Engine Super CD ROM, so please forgive the long review. Set in Osaka complete with giant mechanical crab and Glico man, our man Kanpei stars in this platform game with variety levels and humour to match the Goemon series. The variety includes remembering which the prettiest girl on Osaka bridge is after they have jostled position for a one up. Or a dance section or ride on roller coaster both requiring fast reflexes. Or playing paper, scissors, stone and tossing a sizzling okonomiyaki pancake at the loser. 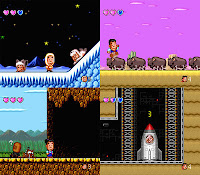 Or mole bashing or rodeo riding..? The real peaches though come on the samurai themed level: slicing through bamboo mats or fighting attached to a kite. The platform sections are fun too: a walking stick power up turning you into an old man to beat everyone with the stick, or climbing up ninja grappling ropes, or jumping over raging bulls. The variety sections may require a little bit of Japanese knowledge, but are simple to work out through trial and error. Genki doesn't often compare to the seminal Goemon series, but Bakushou Yoshimoto No Shinkigeki is real, tear jerking fun.
Posted by GenkiVideoGames.com at 16:07 No comments:

Hopefully those missing a few months of their lives to the game can sympathise with the following. Those who can't - you will come back, won't you?!


It was with great anticipation James
set out for a days fishing in the little town of Moriville. With the
fishing contest due he wanted to have a good days practise before
the big event.

"You got your packed lunch?"
Asked Pinny.

"I think I put it in there with my blood worms." Replied
James, rumaging around in his tackle box.

"Oh! Well, have a good day and don't fall in. See you pet."
Added Pinny as James left for the lake.

"Bye. Stoke up the fire as we'll be frying tonight!" Retorted
James as he boldly strode out the cottage.

The lake wasn't far and James was soon set up spinning out a few casts.
It was a beautiful, crisp winters day - perfect for bagging a few
greedy trout.

"Maybe even that monster pike..." James thought to himself
recalling the words of his good friend Grizzly.

A few of the old boys were down by
the lake. Captain was happily rowing away on his boating trips, singing
songs of some old maiden in some far away town. KK was playing the
blues, strumming his acoustic guitar whilst staring into the deep
blue abyss with a rather melancholic look on his whiskered face.

To be continued...!
Posted by GenkiVideoGames.com at 15:57 No comments: